Skip to content
HomeBlog PostsStakeholder vs. Shareholder: What’s The Difference? And Why It Matters.

When it comes to companies, there are stakeholders and shareholders. They sound similiar, but are indeed different.

What is a Shareholder?

As the name implies, a shareholder is someone who owns stock in a publicly-traded company. For example, if you own shares of Apple in your brokerage account, you are considered a shareholder in Apple Inc.

In general, a company’s primary goal is to maximize shareholder value. Although, more discussions have arisen about whether the shareholder-first ethos is beginning to fade – more on this later.

What is a Stakeholder?

In the 1980s, an idea emerged that a company’s primary goal should be to maximize shareholder value.

One could attribute that emerging ethos to the globalization, or Reganomics and its associated reforms (deregulation) that occurred during that time.

A further contributing factor was the hostile corporate takeovers that were occurring during the 1980s. Companies with lagging stock prices were often faced with a takeover and forced to change their ways.

Pushed aside were the interests of all stakeholders. Executives became obsessively focused on maximizing shareholder value. They did this by cutting jobs, spinning off unprofitable divisions, outsourcing labor to cheaper locations, among other ways.

That pay gap is now at its widest level ever.

Stakeholder success focuses on all parties’ successes, not simply focused on maximizing shareholder value at all costs.

There’s ever-increasing scrutiny of many public companies — wealth inequality is at its broadest level ever. And environmental damage caused by climate change is almost undeniable as 2020 was for the tied the 2nd warmest year on earth (2016 was the other year).

Exacerbated by a global pandemic, the general well-being of all humans and the more significant responsibility of massive corporations during these times are bubbling to the front of people’s minds.

When considering all stakeholders, a business may or may not decide to do business depending on how it may affect a community; what will it do to the environment, how will it impact the local job markets and the social ramifications. It is not as simple as making the decision that will make the most money or make production as cheap as possible.

Companies Are Starting to Value All Stakeholders

Environmental is related to a company’s the pollution, waste, focus on green energy, treatment of animals, among others.

Social factors take into consideration its relationships. How does the company support communities it does business in? What is the company diversity, how does it ensure human rights within its supply chain?

Governance is related to policy making within the executive suite. Do executives incentives align with the values of the company?

There are clear, competing interests when it comes to the responsibility of a company. What may maximize shareholder value may negatively affect the environment, community, or people associated with the company.

It can be a tricky debate as to what is considered “right.” However, with wealth inequality at its widest levels ever, global warming becoming an undeniable reality coupled with a global pandemic thrust into our faces, we will start to see the scales tip back to a world where companies will would more consideration into benefitting all stakeholders, not solely focused on maximizing shareholder value.

This concept often begs another question in personal finance space, do we work simply to accumulate wealth? Or is there a higher purpose?

Should a company focus on all stakeholders or focus on maximizing shareholder value? Comment below and let the RWPF audience know.

Making Six Figures. Is That Even a Big Deal Anymore?

Founder and author of realworldpersonalfinance.com [RWPF]. A blog dedicated to personal finance for millennials that want its readers to know they can be perfectly imperfect. Over the past 10 years, his net worth went from -$108,000 to $380,000, mainly through debt reduction, living below his means, and navigating the corporate world. There have been mistakes along the way, and he is still learning too. He's here to offer honest opinions and real insight that's based on his own personal experiences.

Current Recommendations:
1) Save Major Money By Switching Your Cell Phone Service To Mint Mobile
Mint Mobile plans start at $15 a month. I have the unlimited data plan for $30 a month. Major savings compared to any bigbox carrer!

2) Have The Flexibility To Amend Your Life Insurance With Ladder What makes Ladder so special is the ability to increase or decrease your coverage as needed. They call this “Laddering,” and they’re the only ones in the insurance space offering a feature like this. If your circumstances are likely to change, for example, buy a house or start a family, then having the flexibility to amend your policy is a huge plus

3) Become Your Family's COO with Trustworthy Trustworthy makes it easy to organize important family information that’s easily accessible so you and your loved ones can be prepared for whatever may happen. Plus, all your information is protected at all times with bank-level 256-bit encryption. 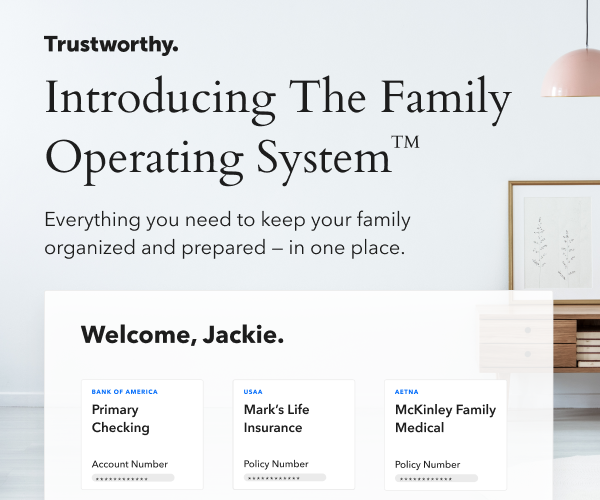